benefits http://www.humanaccessproject.com/
Almost 40 juried artists created original works with collected rainwater. While the subject matter is varied, the over all concept is to bring to light simple ways that we can rethink the way we use water.
Rin Carroll Jackson – open call artist for Recycled Rain Show
24″ x 25″ Original Batik Assemblage
see more photos?

Here is a sneak peek of where we started… 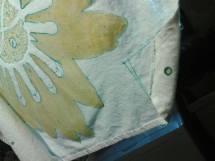 The process of creating the piece for the show:
“I conceptualized and facilitated the planning and design of the piece. I worked with 22″ x 33″ 100% cotton white material, sewing corners, marker-drawing on fabric for design placement, application of hot beeswax in 3 stages and the construction of framing element and hanging configuration. Joe Jackson and I drew water from the studios 165 gallon rain barrel system for mixing dyes (3 different colors), filling wash loads
for the process of fixing dyes (had to heat up to correct temperature), and the
final stage of boiling the beeswax out of the fabric.”
PORTLAND RAIN WATER FOR DYE MIXING, DYEING, WASH CYCLE & BOILING PROCESS

I would like to thank Joe Jackson, who is the dye-specialist I work with, for his help to bring our creations to fruition. His knowledge of and technique in dye work has been vital to the vibrant work coming out of Sleeping Bee Batiks in SE Portland, OR.

Liz Halperin conceptualized and facilitated all elements of the project’s three-country collaborative effort based out of SE Portland, Oregon, USA. September 2010-July 2013

The photo card that was sent out to each of the 49 participants with a greeting from Liz read:

At long last! We’ve all had “life interruptions” making this a 3-year project. The quilt was hung last July, 2013. It is glorious. It hangs in the living room, where I can see it by just turning my head. The front of this card {card image coming} shows you the finished hanging piece, which all of YOU created for me. The interior shows the dancing blocks. These photos, the Shutterfly idea, design and execution are courtesy of  [name removed] when we first drew the first idea on a napkin over lunch. My extreme gratitude to everyone who participated in this project. I love you all.

TOP LEFT: Bright gold, eyes in triangles. Statement: Wisdom can be in my power. 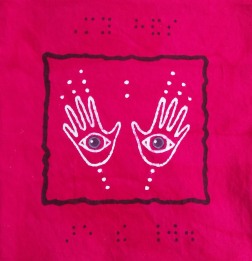 TOP RIGHT: Dark fuchsia, hands with eyes in the palms.  Statement: My hands are the world. (Reference to deafblindness.) 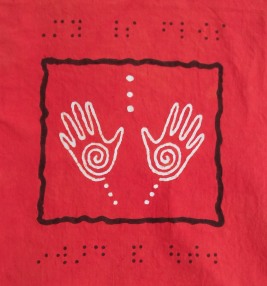 BOTTOM LEFT: Dark orange, hands with spirals on the palms.  Statement: My spirit flows inward and out.

BOTTOM RIGHT: Bright Turquoise, a palindromic design, can be split in half horizontally and be seen/read from either direction.  Statement: Yes.*

Liz approached The Sleeping Bee Studio with her idea of creating a quilt using batik, quilting, and surface-bead-sewing in a collaborative approach. Her desire to include important people in her life to complete the beaded, textural braille element was a dynamic part of the design concept. The braille dots contain statements that have deep meaning in her life.

After Liz Halperin and [name removed], with assistance from [name removed], clarified the projects planning stage, the Sleeping Bee Studio took on the first step of getting the batik panels from 100% white twill cotton fabric to completed, colorful batiks. The black dots on our four original batiks were marked as “placement spots” for the almost 50 beaders that would sew small beads in place. Liz was responsible for the complicated, time consuming task of arranging packaging and postmarking. She gracefully organized packages for the multifaceted coordination of getting each colored panel and supply of hematite beads and thread to the correct person. Once one’s beading portion was done, the package included packaging needed and directions as to where the package would continue on to, and so on, for each person to complete their stage of beading. Once all the elements got back to her it was the start to the quilting process and ultimately the final quilt.

Fabric Design and Creation: Design and hand batik/dye from unbleached twill by Sleeping Bee Studio: Rin Carroll Jackson and Joe Jackson, an extraordinary team who live about 3 blocks from me. These designs are slightly altered for fabric, but were initially designed by Rin for my tattoos. Rin and Joe both created (and sometimes recreated) the fabric. 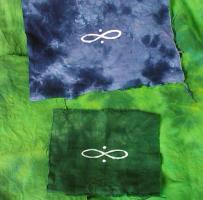 Their logo (and corresponding blog infinity2dots.wordpress.com) is the infinity sign with a dot over and under, to which they added beads. That small block, a late addition to the design, became a wonderful centerpiece.

[name removed]: Driving me out to Fabric World to buy the needed fabrics. [name removed] was in this for the whole ride.

[name removed]: In addition to sewing on beads himself, he stabilized loose beads when I got the blocks back. Amazing guy.

[name removed]: (yet again): [name removed] did ALL of the sewing. She gave us the measurements, sewed the black stabilizing borders on the blocks, then, did the piecework and final binding. (So many stories within this!) She arranged with the custom quilter to do the quilting.

Beaders: 49 people were involved in sewing beads, ranging in age from 11 to 87. The locations they live include Oregon, Washington State, California, Texas, Virginia, New Jersey, Canada and Scotland.

Liz’s love of art and her vision to conceptualize, facilitate and

join together the community of people who have had an important meaning in her life is amazing. As a result she now possesses a treasured art piece that she and many others will enjoy for many years. The “Trust” Quilt project has been a highlight of many meaningful ones we have had the honor to be part of here at the studio. Joe and I are so thankful to Liz for choosing us to be part of the collaboration. In each one of the cards she sent to the participants she summed up her thoughts for how much it meant to her….

Yes.* This is the most powerful piece; it is an answer to a critical ongoing question from The Universe. I didn’t have a way to explain my spiritual part of this. Then not long ago I ran across the following, which is exactly the eloquent description of it. The beaders for this block are both part of that question and my answer.

“I don’t know Who–or what–put the question, I don’t know when it was put. I don’t even remember answering. But at some moment I did answer Yes to Someone–or Something–and from that hour I was certain that existence is meaningful and that, therefore, my life, in self-surrender, had a goal. 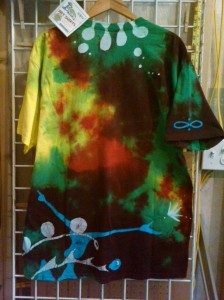